Hello everyone! Back with the last bit of our China trip. You can read all the other parts under the Xiamen Series category. Right so the last full day in Xiamen was a real packed day. We selected a few of the main tourist attractions in town and visited them as quickly as we could. Why? It was hot. So hot that sweat was dripping off me like a waterfall – like this

. Sorry for the disgusting image.

So we started our day by heading to the Nanputuo Temple. It is a 1000 year old temple and is one of the most famous temples’ in China. We got a cab from the Siming Road – pretty straightforward and cheap. From memory we got to the the temple around 11am or  was it 10.30am…definitely before noon though. Anyway, the point of the time was that at that hour it was already getting pretty busy as you can see from the picture below. 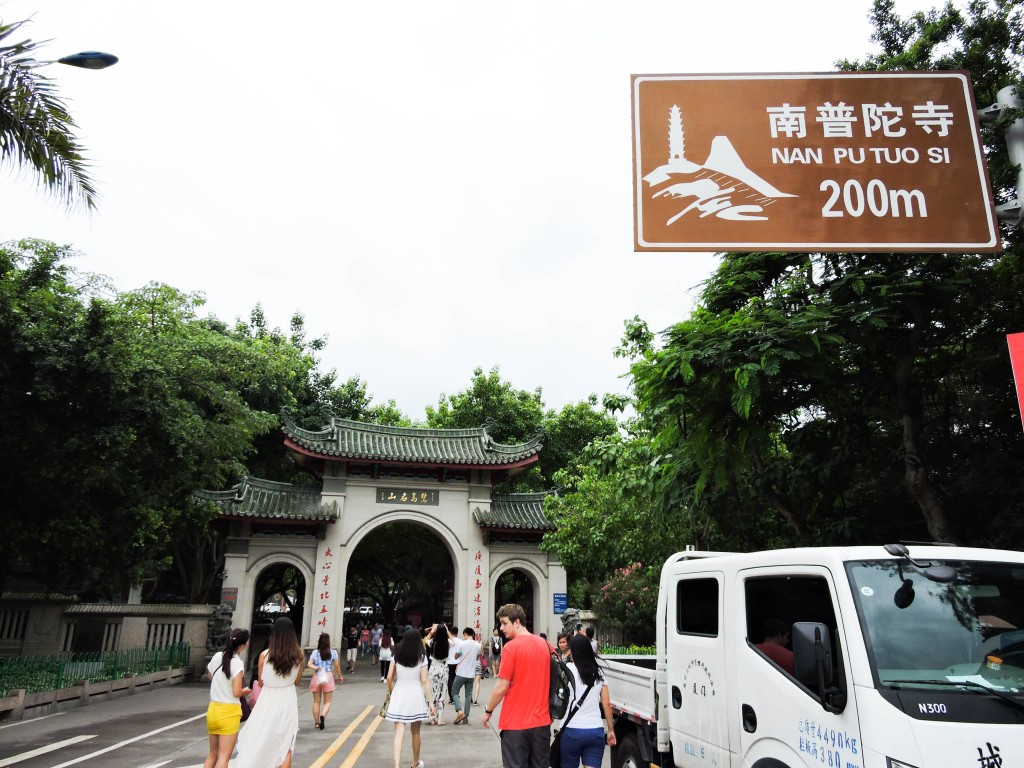 This is the entrance to the temple. Entry is free and there is actually a lot to see and do in here despite it being a temple. You can hire a tour guide but we made do without one – just follow the crowd. As soon as you walk through the main entrance you will be greeted with one of the most beautiful sights ever. 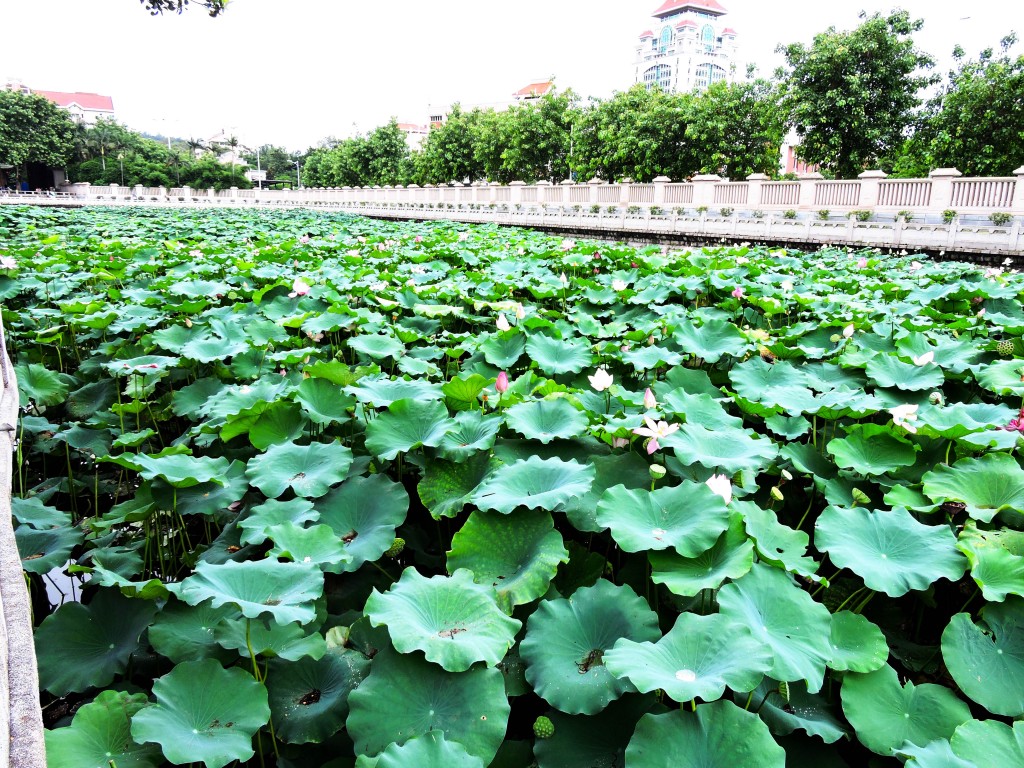 A lush green lotus lake! If you visit in summer that is. Sadly not all the plants were flowering yet but it still looked really beautiful. I have never seen anything quite like it so I was very mesmerized. I walked towards it so fast despite the throng of people in front of me that my family was astounded at my sudden speed. How I wish I could plant them here! All I need is a pond…. 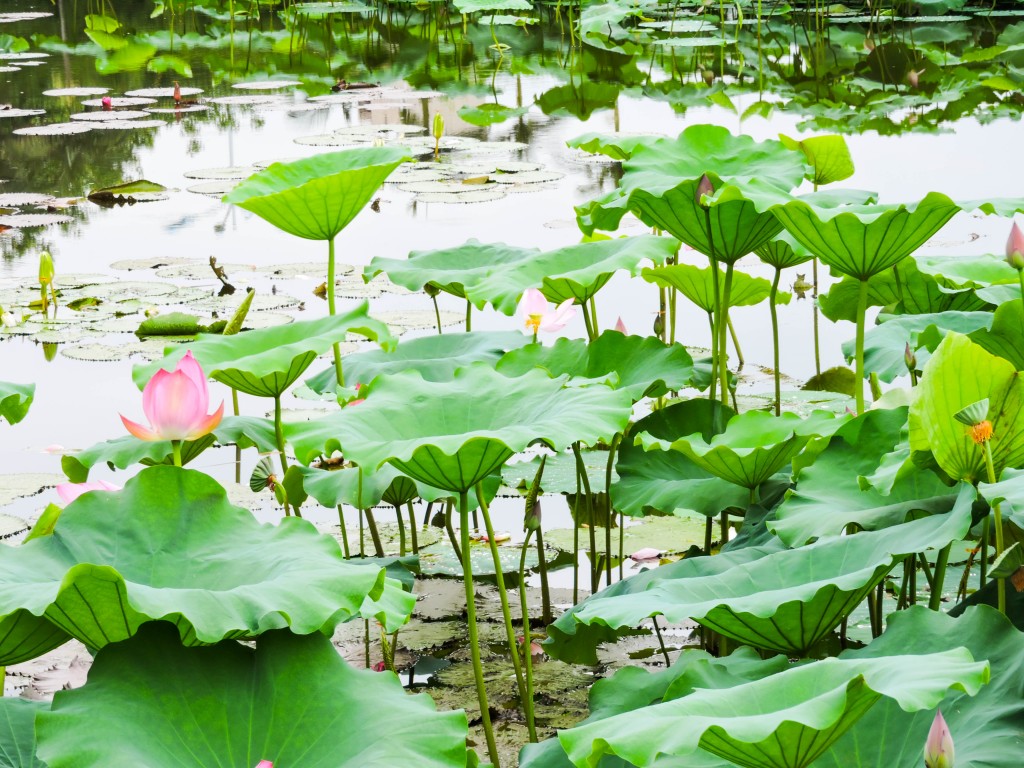 Can you imagine how beautiful they would be in full bloom!

There were white and pink lotuses scattered along this massive lake in the courtyard. I would have reached out to pick one but ah…I think its not a good idea to do that at a temple or anywhere in public really hehe. I spent so long photographing the lotuses that my family started getting impatient. But you know what, it was worth it cause I got shots like these. Ok, one more lotus picture then we can move on alright? 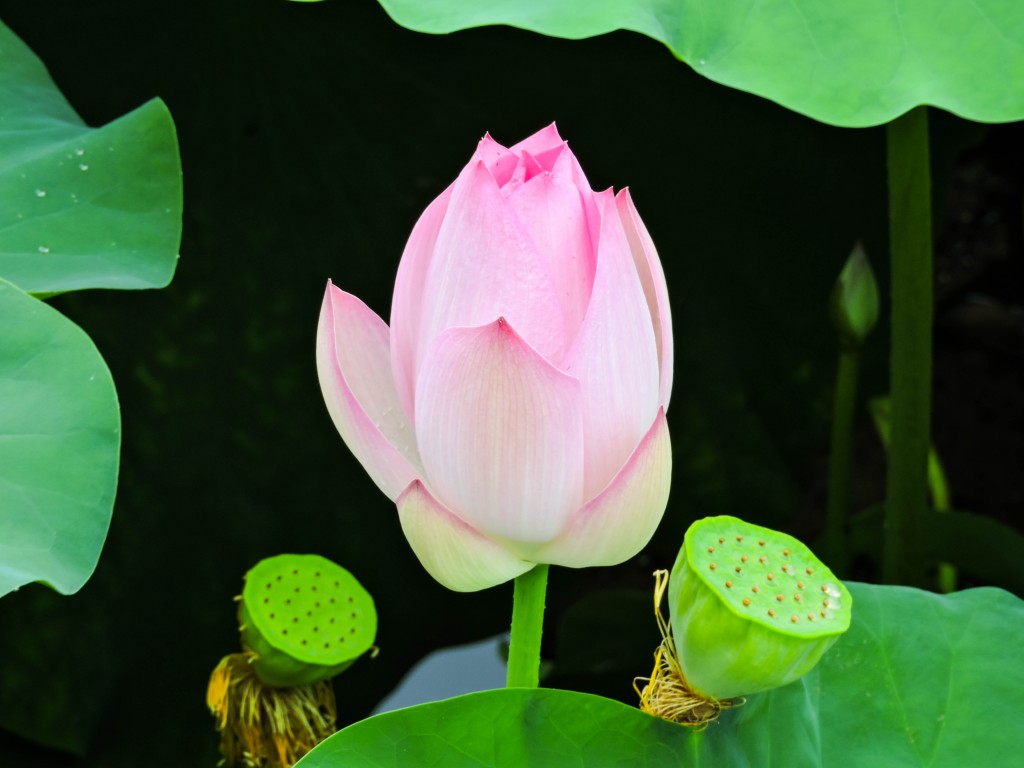 Is that shot not perfect?

yea, I’m tooting my own horn. But in all seriousness this shot perfectly captures the beauty of the lotus flower. So yeah, if you love flowers and want to be wowed definitely try to time your visit when the Lotuses are in bloom. Oh yes! Before I forgot, these were in the lakes in the courtyard too. 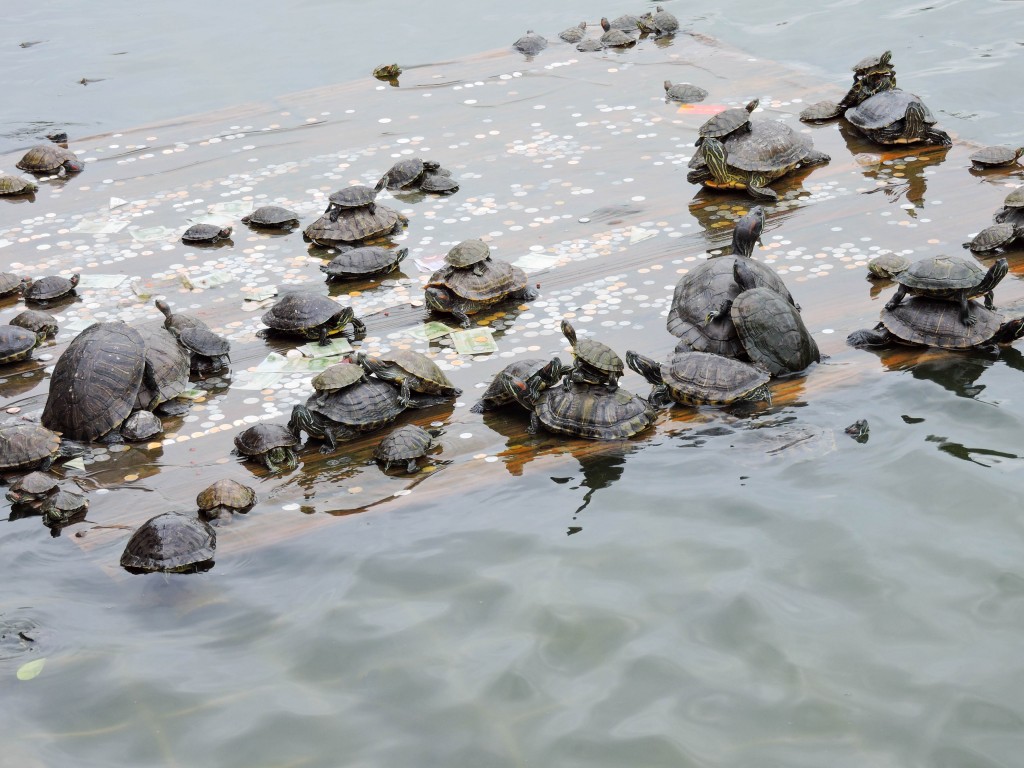 Tons to tortoises and money. Look at them, basking in the sun surrounded by money…ahh the life. But in all seriousness these tortoises were placed there by people who found them as strays or wanted them to be re-homed (possibly). I am guessing it is because tortoises have always had a high significance in Chinese culture so where better to place them than in a lake at a temple. Not sure what their significance is but they are up there in rank alongside the dragon, tiger and phoenix. After spending some time in awe of the sheer number of tortoises we decided to actually see the temple. 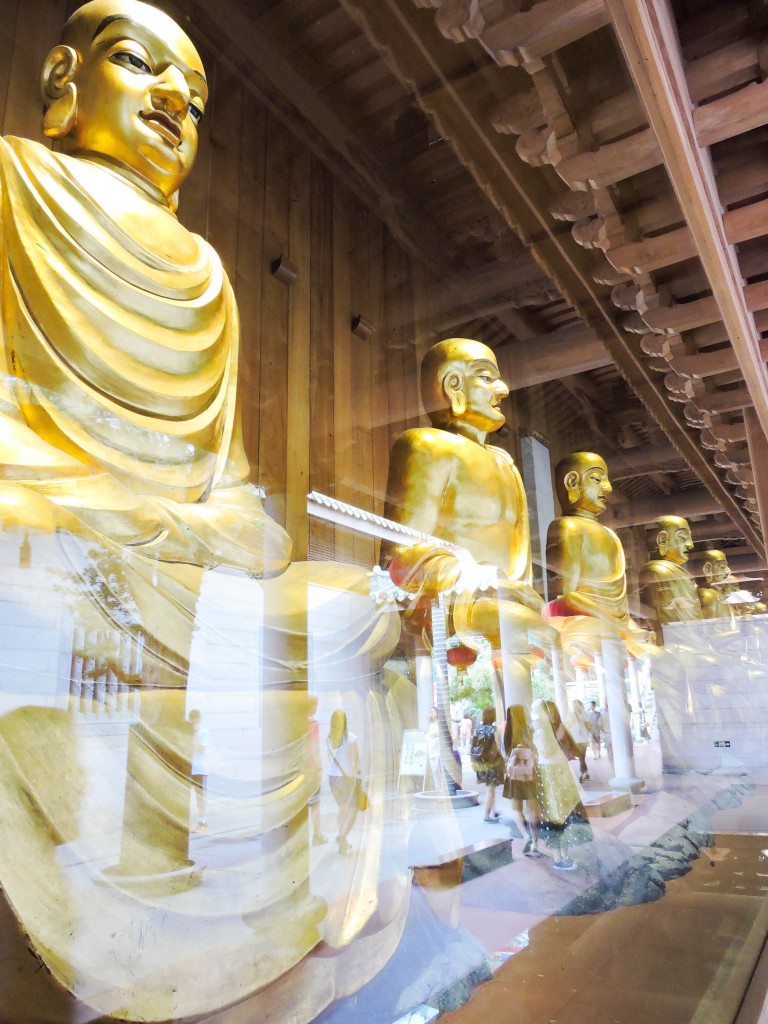 The temple was packed with visitor praying and restoration works were ongoing as well. It wasn’t easy to get many pictures. But along the sides of the temple there are rows of gilded golden statues. I am not sure who they are meant to be… if you do, please let me know! So we followed the crowd and it turned out most people went to climb the mountain on which the temple sits on. We decided to follow suit and boy oh boy would a portable fan have been handy (tip!).

The climb up was not the easiest especially due to the sheer amount of people there IMO. The stairs are quite narrow and steep. There are also no guardrails along the side so be very careful – some visitors will not hesitate to push in order to get ahead. I don’t think we got to the top because I was getting really grumpy

. However , we did get to the viewing platform that was midway up the mountain before heading back down. 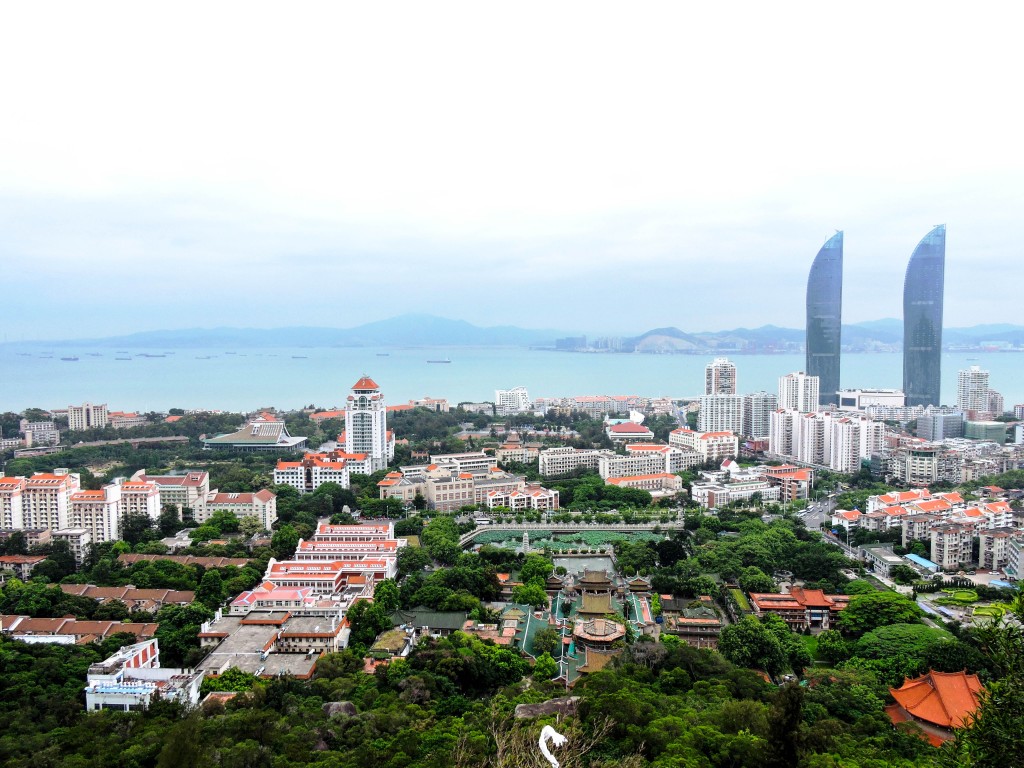 Pretty great view huh? After this we walked back down the mountain which was getting busier by the second. Also I would like to take this opportunity to give credit to all the women who climbed up this mountain in HIGH HEELS. I am not sure if you were unprepared or just really gung ho about heels but either way, I salute you. Even in sneakers my legs were turning into jelly. Before you leave the temple area try you luck to see if you can visit Xiamen University which is right next door! Oh, the cafe at the temple is also meant to be really good but we didn’t go. 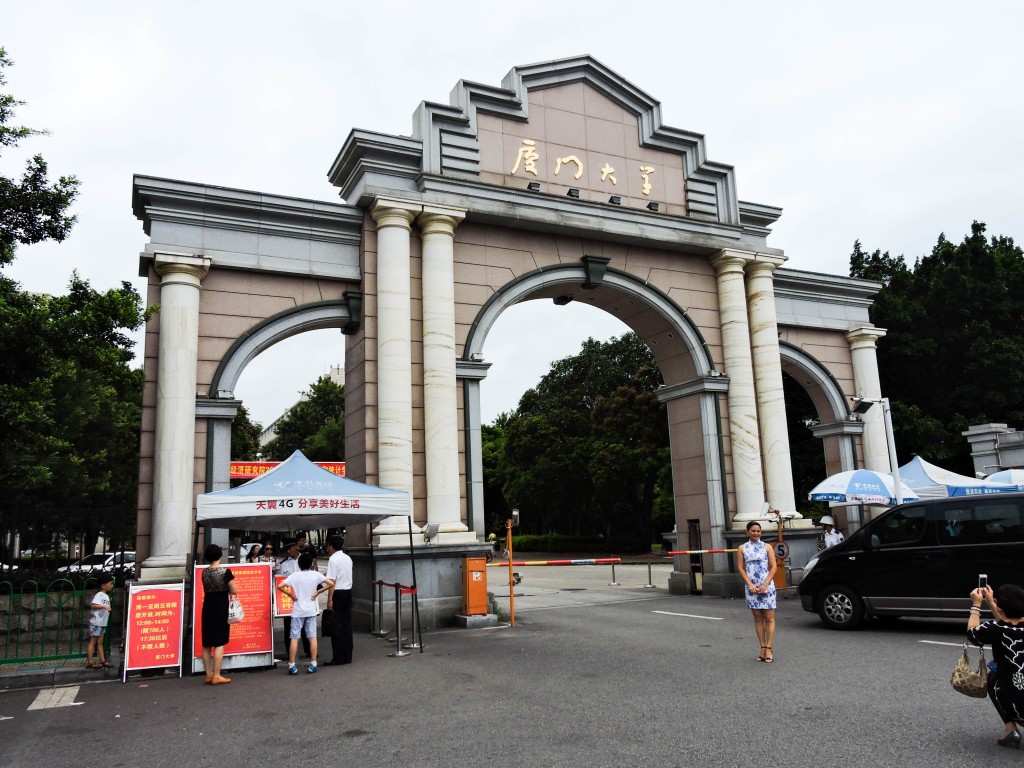 Alas luck was not on our side and this was as far as we got. They only let a certain amount of people in everyday for a certain period during the day. Unfortunately the quota was already filled that day. I hear it is a beautiful campus right by the beach. Worth checking out if you manage to get in! Since we failed to get in we decided to move on and head to our next destination – Hulishan Fortress. 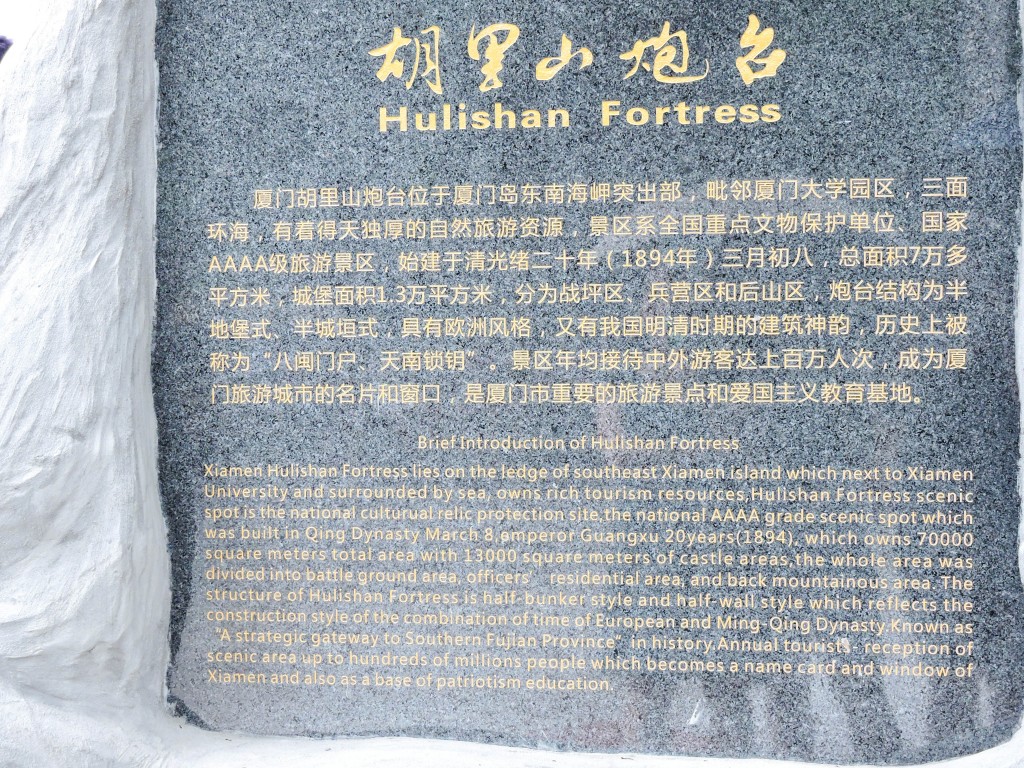 We caught a cab there from the temple and it isn’t too far away. There is an entry fee but it isn’t too overpriced IMO. Mind you I live in NZ where everything is infinitely more expensive in comparison. The fortress was interesting as I was able to learn a lot of new things. That being said, it really is a place for war history buffs as there is just so much to know! I was a little overwhelmed by all the things to read and shut down after awhile… it was way too hot to be studying anyway

. There is simply too much to read. So yea, be prepared to study if you aren’t well versed in war history.

The fortress area is very big and to fully explore it would take a good half-day at the very least. They have re-enactment performances, 3D movie (it is in Mandarin), replica displays, lots of cannons etc. 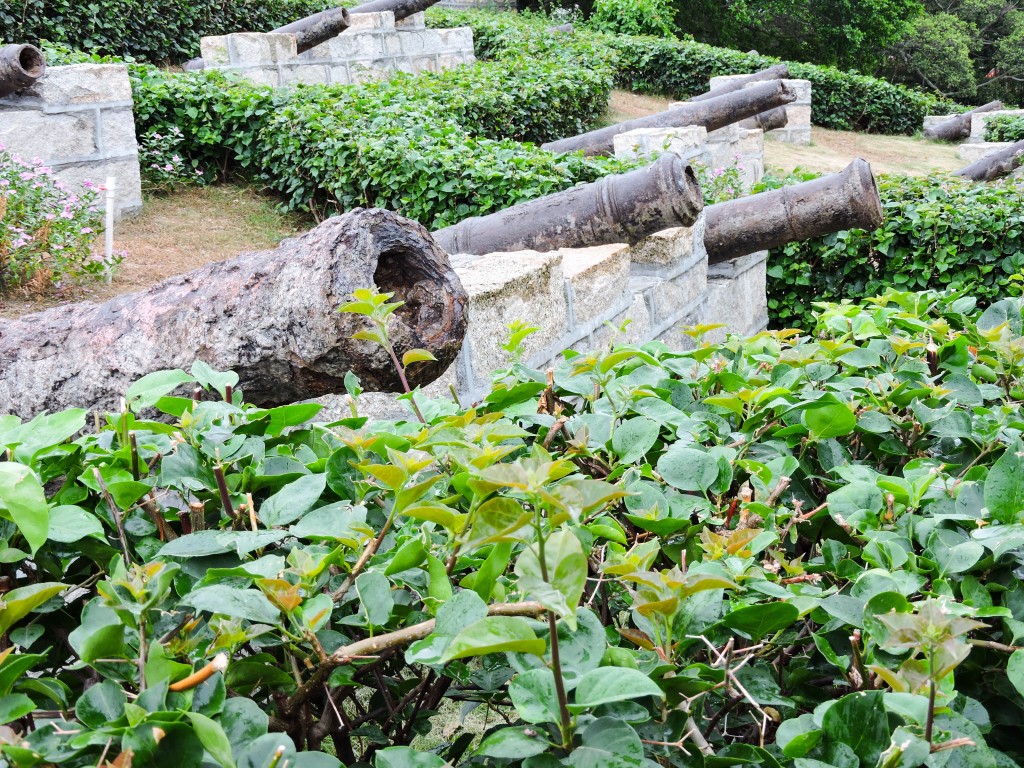 Said cannons but….this was the really impressive one and super difficult to get a picture of. Presenting to you the Krupp cannon – the largest cannon in the world if memory serves me correctly. 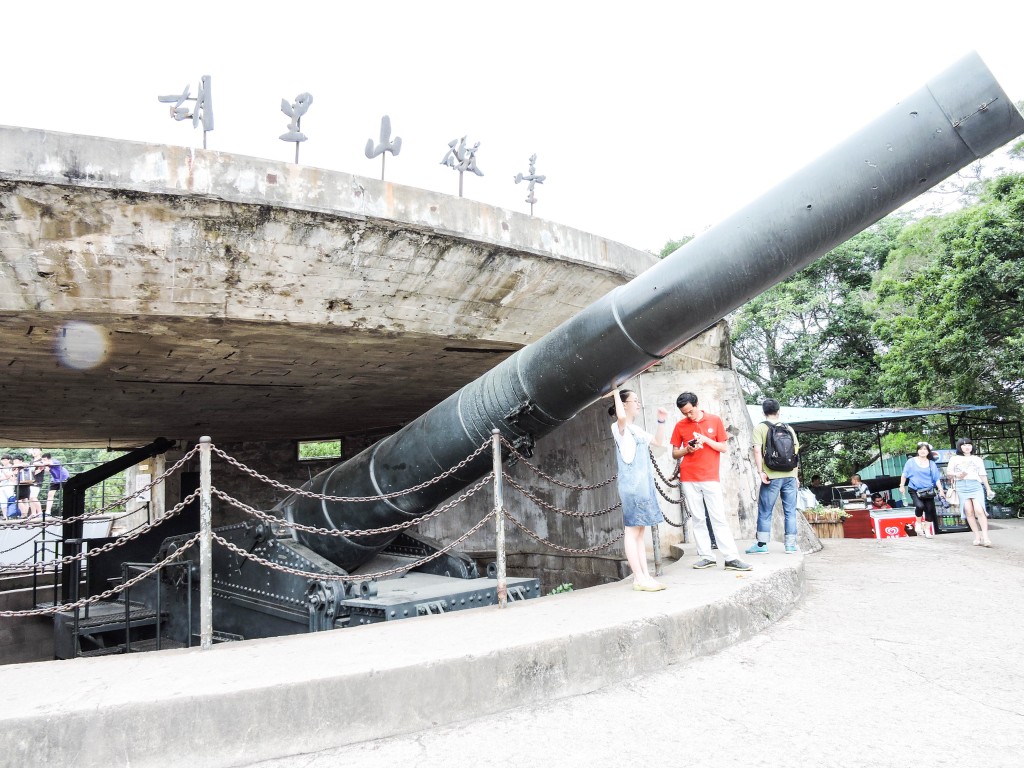 After this we left because it was close to tea time and it started raining. If you are heading back to the Siming area, you would need to catch a cab from the opposite side of the attraction’s entrance – a cabby told us that. Once we got back to the hotel it was straight to dinner. The rellies took us to this street near our hotel where all the shops were one seafood restaurant after another.  Unfortunately I cannot remember the name of the restaurant we ultimately ate at BUT, I do remember there being free wifi. So that could be a clue. The food at this restaurant was amazing and I think my rellies chose it because the seafood looked fresh ie. they had a live selection

.  Sigh, man I feel like a murderer now but I like food too much that it overrides the guilt very quickly. Now I just sound like a terrible person 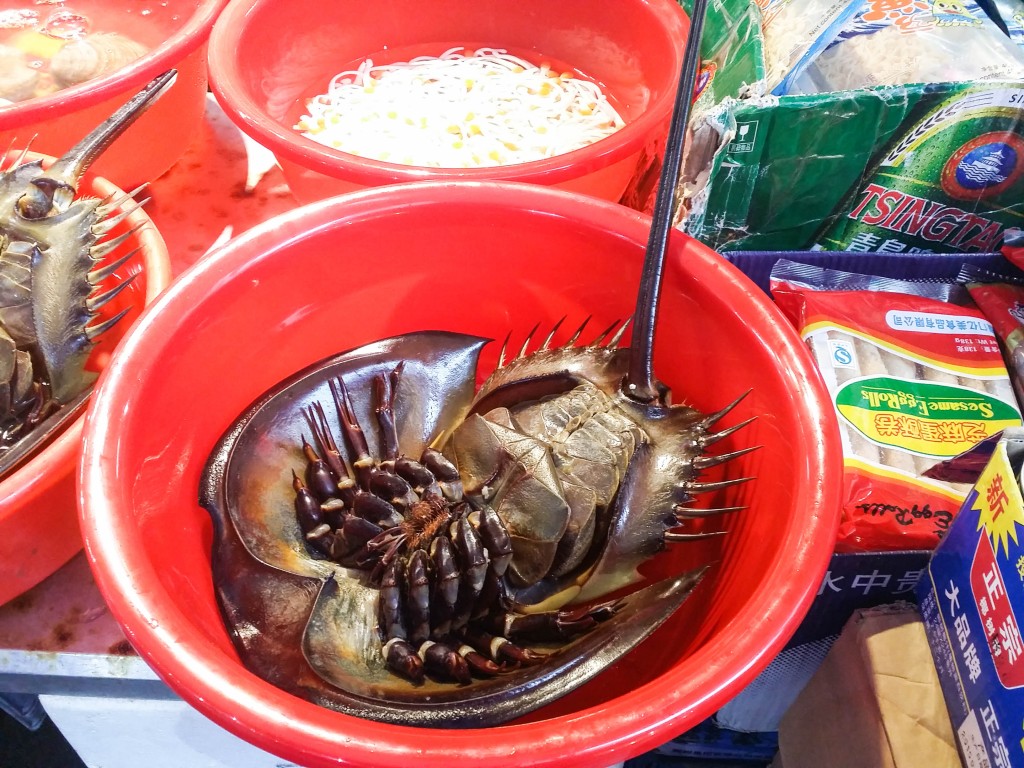 This was for sale. I wonder who decided to catch this for consumption? I mean did they not see the tail?! It looks like an alien too. We didn’t order it but I must say I am intrigued as to how much meat there is in this crab and how it is cooked. We had these dishes instead. 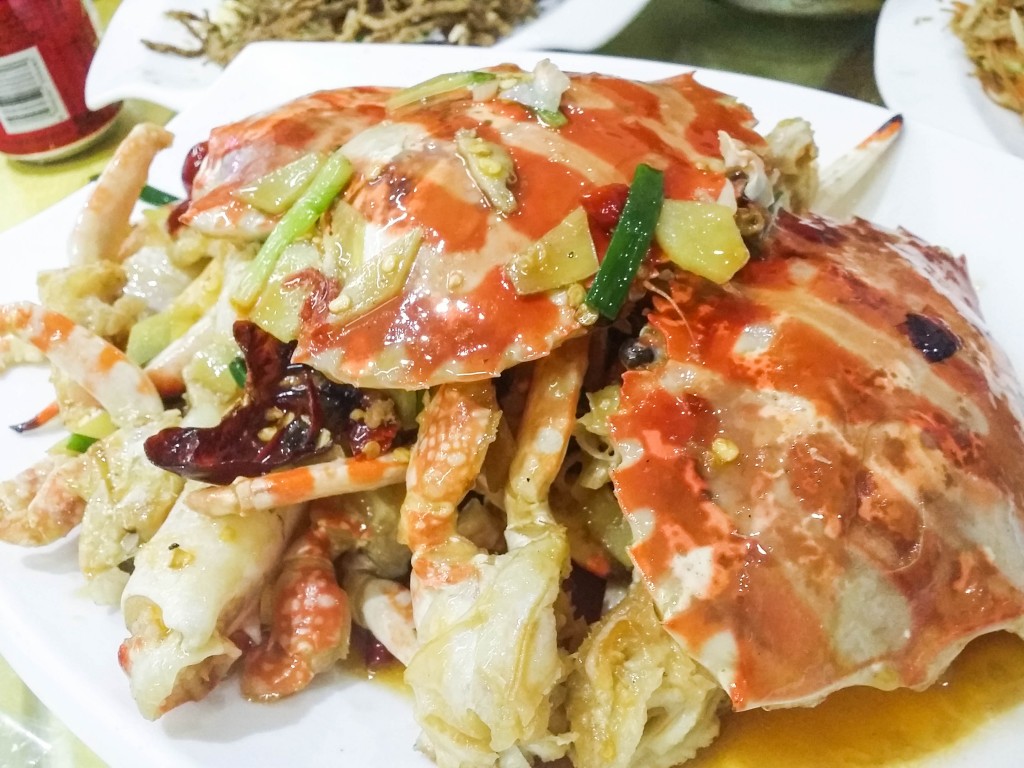 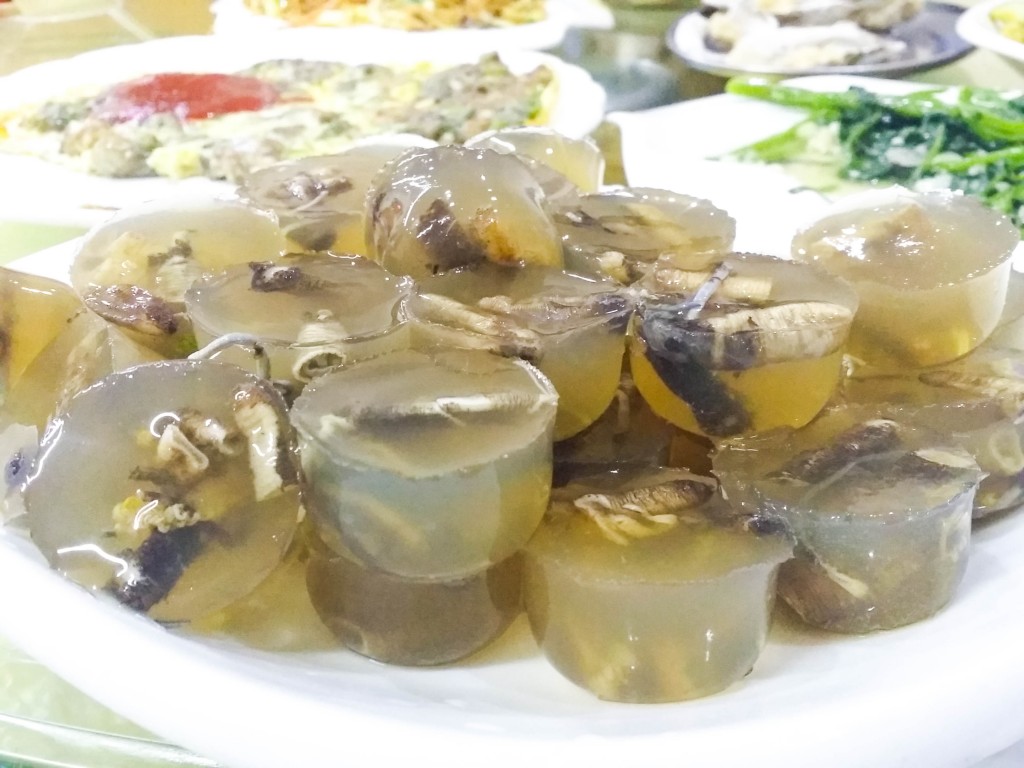 Of course there was crab

my beloved crabs, I shall have you again soon but not necessarily in China. The jelly looking things below the crab dish is a sort of razor clam. It is a cold dish and the jelly is made from the clam itself? Like how you boil beef bones then it solidifies to this jelly texture – that’s how this is made. It was pretty good. M didn’t think so though. We also had baby eel, prawns, oysters, orh jian, fried noodles and vegetables. My hands were too dirty to photograph those so I will leave them to your imagination.

This market is definitely worth a visit if you are in the area. I can’t tell you the exact address but basically it is on the street parallel to Zhongshan Rd (pedestrian mall). Best way to get there is to cut through the ‘food alley’  located along Zhongshan Rd, walk to the of this alley where you will see a big mall. When you see the mall, turn right down that street and continue walking till you see the seafood shops on your left. Hopefully these direction will get you there….

After dinner we went back to the pedestrian mall, bought a few more souvenirs and headed back to the hotel to pack. We left fairly early the next morning. Some things to note about international departures from the airport. They have this weird system there where the international departure check-in counters are behind guarded closed doors. Has anyone else seen a system like that? It is a first for me so I thought I should note it down in case you guys get caught out by it.

And there you have it, a summary of our Xiamen trip. It was a short holiday but worth every minute. We got to spend time with the family, visit really cool places, learn more about my family history and eat great food with great company. What more could you want from a holiday? I think I’ll end here and call it a night, maybe dream about my next holiday haha. Till next time –